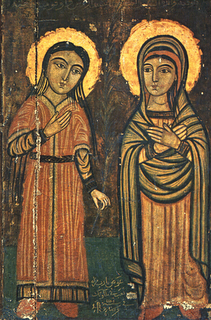 A little over two years ago I started to read about the desert mothers and fathers who where key to the beginning monasticism within the Christian faith. They would remove themselves from their lives in cities, or wherever they were at and gave up their possessions to live in desert communities. There they would focus on growing closer to G-d through meditation, prayer, reading, study, and engaging in community while caring for the poor. The Abba’s (fathers) and Amma’s (mothers) set up rules in hopes to make a strict Christian life, but no doubt at times failed at it.

So after I ordered a few books on their sayings and it really opened my mind and insight to meditation and growth. I have spoken a few times, and will write more about it in the future that there has been an over spiritualization of Christianity and Jesus, and in doing so removing the physicality that the kingdom of heaven calls us to, to those around us. But one story about this community really stuck out to me that I’d like to share.

Once a brother committed a sin in Scetis, and the elders assembled and sent for Abba Moses. He, however, did not want to go. Then the priest sent a message to him, saying: Come, everybody is waiting for you. So he finally got up to go. And he took a worn-out basket with holes, filled it with sand, and carried it along.

The people who came to meet him said: What is this, Father? Then the old man said: My sins are running out behind me, yet I do not see them. And today I have come to judge the sins of someone else. When they heard this, they said nothing to the brother, and pardoned him.

This particular story is from the book Desert Wisdom: Sayings from the Desert Fathers translated by Yushi Nomura. I really love this story. This past week I started my newest class in my journey towards my bachelors in Biblical Studies, Evangelism and Discipleship. During this particular class, the idea of judging fellow Christians came up, and it was a subject I had not thought about in a number of years. Then this story came to mind.

I have spent a lot of time developing my theology in a bubble over the past few years (which I realize is not the healthiest way to do this). Spending time reading, doing word studies, studying sources, engaging in conversations, and then when I had ideas developed presenting them to friends or family to gain insight to see if I was completely in the outfield. In this process of leaving traditional evangelicalism I didn’t realize how off the pulse or out of touch I am in some areas. Sometimes, like Tuesday night, it feels like that I cannot bridge that gap. Other times, again like on Tuesday night, I have dropped a few things like expressing that I am in no way an evangelist and they were received in open arms. Which is what brought this story to mind.

We spend a lot of time casting stones and fighting why we are right over the “other”, conservative or liberal. And as someone with liberal leanings, I want to engage, study, and argue for the sake of heaven with those brothers and sisters that disagree.

May we all be more like Abba Moses in this endeavor.